Chromatography is the most widely used separation technique in chemical laboratories 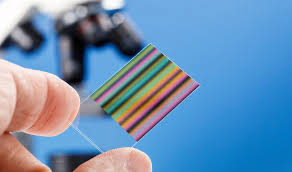 Chromatography is the most widely used separation technique in chemical laboratories, where it is used in analysis, isolation and purification, and it is commonly used in the chemical process industry as a component of small and large-scale production. In terms of scale, at one extreme minute quantities of less than a nanogram are separated and identified during analysis, while at the other, hundreds of kilograms of material per hour are processed into refined products. It is the versatility of chromatography in its many variants that is behind its ubiquitous status in separation science, coupled with simplicity of approach and a reasonably well-developed framework in which the different chromatographic techniques operate.

Chromatography is essentially a physical method of separation in which the components of a mixture are separated by their distribution between two phases; one of these phases in the form of a porous bed, bulk liquid, layer or film is generally immobile (stationary phase), while the other is a fluid (mobile phase) that percolates through or over the stationary phase. A separation results from repeated sorption/desorption events during the movement of the sample components along the stationary phase in the general direction of mobile-phase migration. Useful separations require an adequate difference in the strength of the physical interactions for the sample components in the two phases, combined with a favourable contribution from system transport properties that control sample movement within and between phases. Several key factors are responsible, therefore, or act together, to produce an acceptable separation. Individual compounds are distinguished by their ability to participate in common intermolecular interactions in the two phases, which can generally be characterized by an equilibrium constant, and is thus a property predicted from chemical thermodynamics. Interactions are mainly physical in type or involve weak chemical bonds, for example dipole–dipole, hydrogen bond formation, charge transfer, etc., and reversible, since useful separations only result if the compound spends some time in both phases. During transport through or over the stationary phase, differential transport phenomena, such as diffusion and flow anisotropy (complex phenomena discussed later), result in dispersion of solute molecules around an average value, such that they occupy a finite distance along the stationary phase in the direction of migration. The extent of dispersion restricts the capacity of the chromatographic system to separate and, independent of favorable thermodynamic contributions to the separation, there is a finite number of dispersed zones that can be accommodated in the separation. Consequently, the optimization of a chromatographic separation depends on achieving favorable kinetic features if success is to be obtained.

Causes and risk factors of Melasma